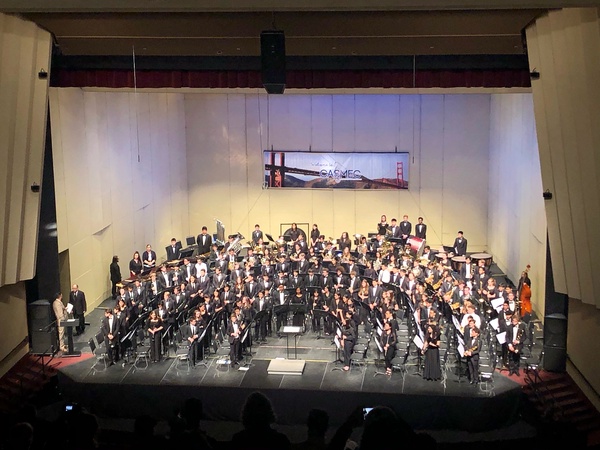 The Annual California All State Honor Band  was held this year in Fresno from February 20th, 2020,  through the 23rd. Over 15,000 High School students all over California auditioned to get into five categories : Concert Band, Symphonic Band, Wind Symphony, Symphony Orchestra, and String Orchestra. Only about 500 students made it in, including four of our own Benicia High Panther Band Members!

Elijah Burckin (on tuba), Krishna Mandal (on bassoon), Maxine Mayor (on bass Clarinet), and Allison Rigler (on trombone), made it into three different ensembles representing Benicia. The four of them left early Thursday morning for Fresno to check in and perform in additional seating auditions.

Each day for the bands had them getting up around 6:00am to go to a three hour morning rehearsal, and then another three hour afternoon rehearsal after lunch. Each evening there were also performances from groups from all over California that the students were able to watch.

Students even got to meet famous composer John Mackey, who composed many of the pieces that the honor bands played. Mackey was able to meet and talk with each honor band, and took impromptu pictures and gave out autographs.

“It was an eye-opening experience!” one of the Benicia kids said, “We are so honored to have gotten this opportunity.” This is the first time in four years that the band has had more than one student at All State. The band is excited to try and get even more students into All State next year.