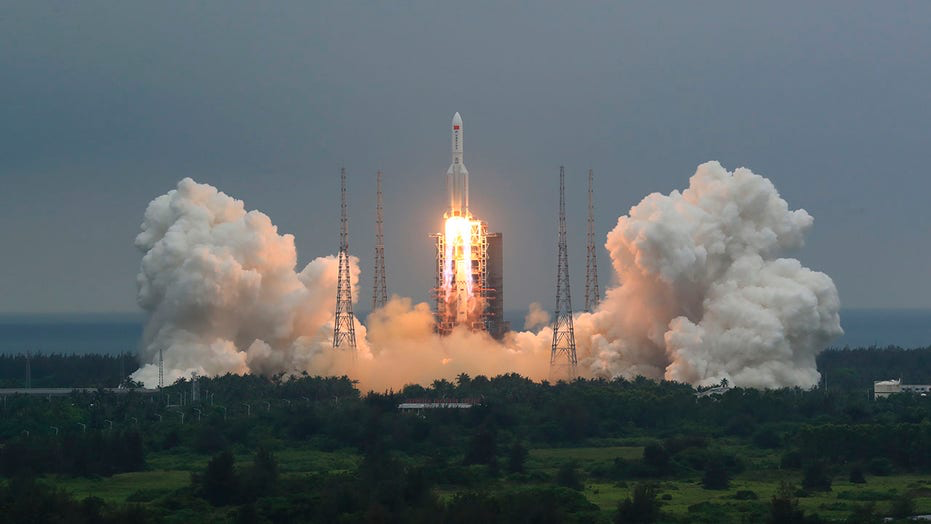 On Thursday April 29th, China launched the start to a new space station. The rocket in question was the Long March-5B. According to CBS, “The Chinese space agency hopes to complete the sophisticated research lab in 2022, securing its status as a space superpower with long-duration orbital expeditions by three-person crews.”

This new station, Tiangong, is supposed to be smaller than the International Space Station, but will have similar purposes which include “microgravity research” and “earth observation and technology development.”

The New York Times says, “Usually, the large booster stages of rockets immediately drop back to Earth after they are jettisoned, but the 23-ton core stage of the Long March 5B accompanied the space station segment all the way to orbit.” This soon caused a problem though as it began falling back to Earth due to the friction between the air and the rocket. Because of this friction, “it soon began losing altitude, making what is called “uncontrolled re-entry” back to Earth inevitable.”

The New York Times adds that, “In recent decades, rocket stages that reach orbit typically fire the engine again after releasing their payloads so that they drop out of orbit, aimed at an unoccupied area like the middle of an ocean.” Because China did not fulfil this plan, the rocket ended up making its way back to Earth, unpredictably.

Since the re-entry of this rocket corpse was uncontrolled, no one had any idea where it would land. Considering the Earth is about 71% water, there was a very low chance it would land on land. BBC News claimed that, “Space experts, however, predicted that the chances of anyone being hit were very small, not least because so much of the Earth’s surface is covered by ocean and huge areas of land are uninhabited.”

Still, citizens all over the world began to feel anxious as there wouldn’t really be a predicted place of landing until it got closer to the surface, and there wouldn’t be a lot of time to prepare for possible damage after that point.

According to Jonathan McDowell, “an astrophysicist at the Astrophysics Center at Harvard University,” the debris that would make it to the surface would be the “equivalent of a small plane crash scattered over 100 miles.”

In response to the whole situation, Bill Nelson, NASA’s administrator, made some statements on NASA’s website. He explained, “Spacefaring nations must minimize the risks to people and property on Earth of re-entries of space objects and maximize transparency regarding those operations. It is clear that China is failing to meet responsible standards regarding their space debris. It is critical that China and all spacefaring nations and commercial entities act responsibly and transparently in space to ensure the safety, stability, security, and long-term sustainability of outer space activities.”

Thankfully though, the rocket did indeed fall into a body of water. While the rocket was partially broken apart in the Earth’s atmosphere, some of the debris was found in the Indian Ocean, near the Maldives.  It was confirmed that parts of the rocket hit the water on May 9th at around 10:24 A.M, Beijing time. The New York Times stated that China’s Space Administration “announced that the debris had entered Earth’s atmosphere over the Mediterranean before flying over the Middle East and coming down near the Maldives, south of India. People in Israel and Oman reported sightings of the rocket debris on social media.”

“It said most of the debris had burned up on re-entry. It was not immediately clear whether any of what remained had landed on any of the Maldives’s 1,192 islands,” says the New York Times.

This surprisingly isn’t the first time China has had incidents like this. “Rockets from one of its principal launch sites, the Xichang Satellite Launch Center in Sichuan Province, routinely fell on rural areas downrange, occasionally causing damage.” Along with that, “Last year, the first launch of a Long March 5B rocket lifted a prototype of China’s crewed space capsule. The booster from that rocket also made an uncontrolled re-entry, with some debris raining down on a village in Ivory Coast.” With more rockets planned to ascend to Tiangong, the new space station, there is a chance a similar re-entry may happen again if the previous flaws are not acknowledged and no changes are made.

According to Jonathan McDowell, “Since large chunks of the NASA space station Skylab fell from orbit in July 1979 and landed in Australia, most countries have sought to avoid such uncontrolled re-entries through their spacecraft design.” Because many countries have learned how to prepare and prevent these situations from happening, “it makes the Chinese rocket designers look lazy that they didn’t address this.”

Although the incident was most likely able to be avoided, it is a blessing that none of the debris landed in populated areas, meaning everyone is safe and unharmed from the rocket.